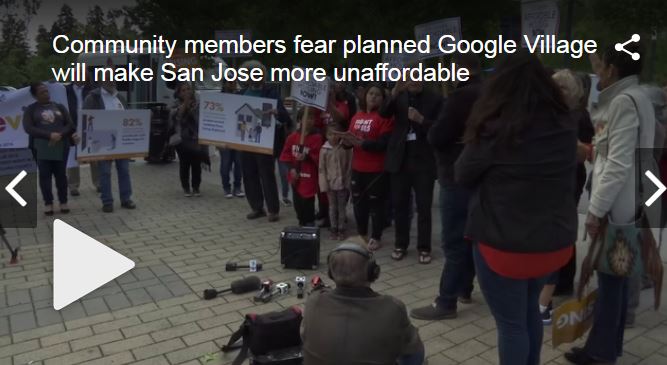 Google is planning a large development in downtown San Jose that could bring more than 20,000 jobs to the region.

But some community members fear the development will make living in San Jose unaffordable.

Outside Google headquarters along the Peninsula, community groups, students, faith leaders, and labor leaders presented Google with a list of demands and concerns when it comes to the tech company's proposed campus in downtown San Jose.

She calls the proposed development a mega-campus

Others call it Google Village.

"The rising of the rent is going to be a consequence of the large development," renter Odile Estrada said.

Google confirms it has been buying parcels of land surrounding the Diridon Station since 2016.

The mixed-use development may include retail, residential, and office space.

And it could be as large as 8 million square feet. Fernandez and other community members have presented Google with a list of demands they hope are considered before construction.

Google spokesperson Javier Gonzalez attended the demonstration and says he hears the concerns.

"We look forward to discussing these in the city, live community engagement process, and thoroughly reviewing it with the community," Google spokesman Javier Gonzalez said.

Google says the earliest ground will be broken on this project would be 2025.