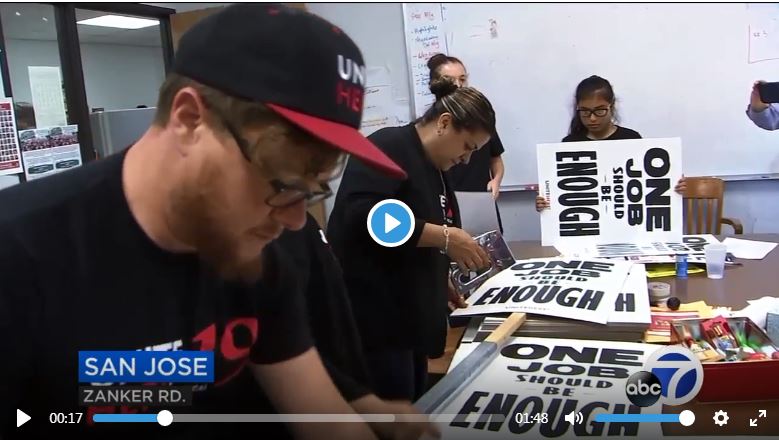 The Supreme Court's ruling Wednesday that public sector union-represented employees do not have to pay for collective bargaining is expected to hurt organized labor.

California has an estimated 2.5 million union members -- 1.3 million of them work in the public sector and are covered by the High Court's decision.


Ben Field, executive director of the South Bay Labor Council, told ABC7 News, "What this decision does is it creates a free rider problem and undermines the ability of unions to represent all the workers in workplaces and get good contracts for wages and benefits."

The term "free rider" describes those who may elect now not to pay dues to cover collective bargaining, even though they would benefit from negotiations by a union.

Leaders of the California Policy Center, based in Orange County, were proclaiming victory. The organization is projecting unions to lose substantial income. "That is hundreds and hundreds of millions of dollars," said CEO Mark Bucher. "Probably close to a billion dollars in California that's finding its way into politics that has been forcibly taken from people to push causes they don't believe in."

The Supreme Court says government workers can't be forced to contribute to labor unions that represent them in collective bargaining, dealing a serious financial blow to organized labor.

However, union-represented Mullissa Willette, who works as an assessor's office investigator in Santa Clara County, said she and other union members are resolved not to allow this ruling to hurt the union movement.

Willette is a member of the SEIU (Service Employees International Union).

That is not fazing hundreds of hotel workers spending Wednesday afternoon making informational picket signs and practicing chants at the UNITE HERE Local 19 office in San Jose. They organized a march in downtown San Jose Wednesday afternoon as the union prepares to enter contract negotiations with five major hotels.